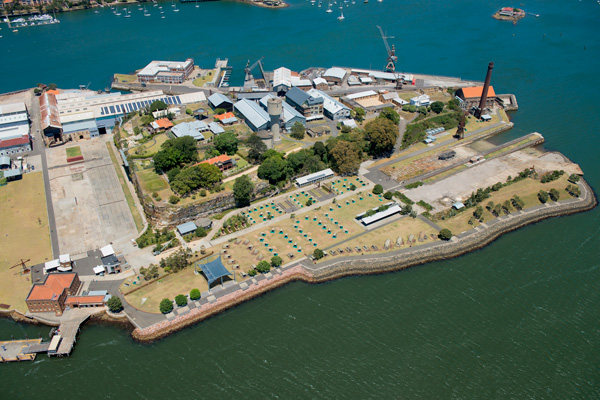 Those little dots on the ground are tents and some of them are set up for Glamour Camping – Glamping.

Cockatoo Island is a heritage-listed island in the middle of beautiful Sydney Harbour. Hop on a ferry and explore the island for the day or stay overnight in the campground or holiday houses.

Retaining all its character and heritage from decades of human endeavour by convicts and shipbuilders alike, Cockatoo Island has undergone a renaissance in every sense of the word and opened its doors to all.

Glamping Cockatoo Island Sydney Harbour: – When you don’t have the equipment or much time to plan, Glamping is the way to go. It’s a laid-back luxury camping experience where everything is organised for you. Unlike traditional camping where you bring the tent and gear with you, with glamping it’s all set up and ready to go on your arrival.

There is a large camping kitchen is available which includes 10 x BBQ areas, a fridge, microwave and a zip boiling water system, campers need to supply their own cooking utensils, cutlery and plates. Additional camping mats and chairs can be hired from the Accommodation Office.

When Aerial Photography is done on Sydney Harbour we often travel past Cockatoo Island because the Parramatta River west of the Harbour Bridge is a helicopter lane. We see it in its best and its worst and take aerial photos of Sydney in whatever conditions our client requires . The fun days are when there is lots of activity to do with Glamping Cockatoo Island Sydney Harbour. People, families, big groups, small groups are everywhere and the cafes and restaurants are very busy.

The 19th Biennale of Sydney are currently exhibiting on Cockatoo Island until the 9th June.