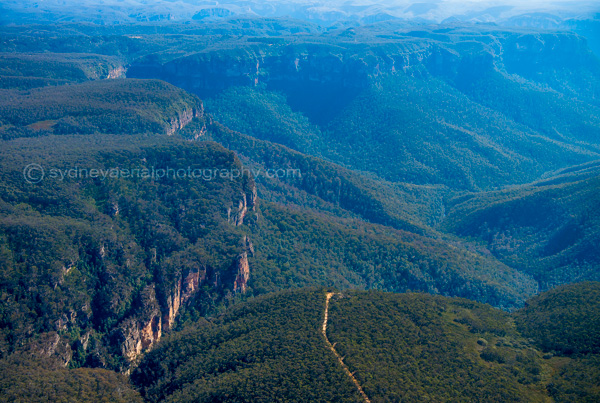 The end of the line – good brakes required

Recently I flew an assignment to the Blue Mountains just west of Sydney, NSW. You can see from this shot why the area is called ‘The Blue Mountains’. No tricks in photoshop on this pic. This is the natural hue of the picture. The original file is a large 34MP RAW file and would make an amazing enlargement somewhere. That dirt track leads to a spectacular lookout. Be careful, drive slowly and break early.

Flying in the Blue Mountains is a tricky affair and only for the experienced weather forecasters. We jagged a good pattern even though the flight had been cancelled earlier in the day due to pending weather changes. I had a feeling it would stay clear for us and it did. Large towering cumulus clouds danced around us but stayed away from casting a shadow on the target. Although there was some fog haze I was able to remove it in Photoshop … a trick I have perfected over the years. Removing haze from aerial photos is an invaluable trick for the aerial photographer.